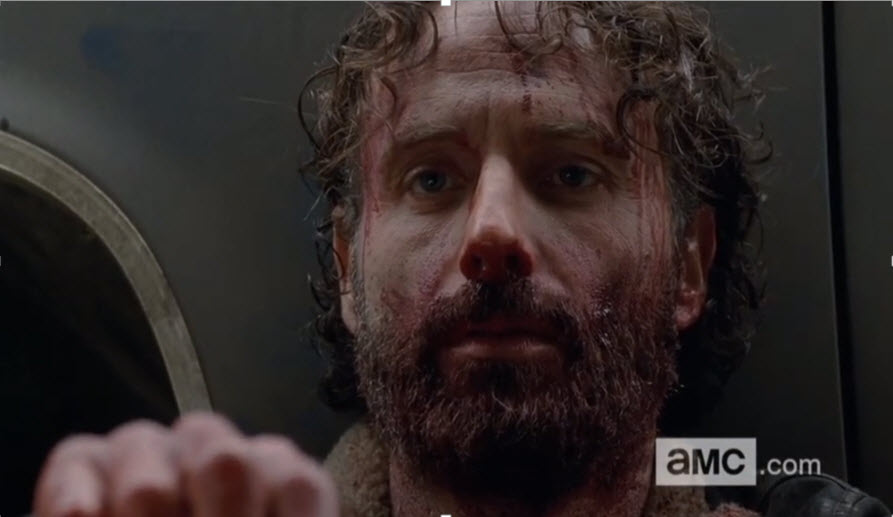 As a video sales letter copywriter, I was going to title this: “What The Walking Dead Has Taught Me About Writing VSLs”.

So what does this picture have to do with how to write a better VSL?

In the picture above, Rick Grimes, the lead character in The Walking Dead is sitting against a truck tire… face covered in blood… with a look of shock and terror in his eyes.

That was the opening of Season Four’s Finale.

And it had me hooked from second one. Why?

I’ve been studying winning VSLs for as long as they’ve been around. But it wasn’t until this VSL strategy was pointed out to me by Rick Duris (responsible for more than a few VSL controls himself) that I was even aware of it.

His words hit me like a ton of bricks. And now my clients and I are seeing results. MAJOR RESULTS. What I’m about to share is so subtle, yet so essential, it’s the reason why I decided to write this article. I had to get the word out.

If you do this one thing, I can guarantee at minimum you’ll skyrocket your video engagement stats. At best, you’ll significantly boost conversions.

All you have to do is ask yourself one simple, easy question…

Embed This Image On Your Site (copy code below):

As a Video Sales Letter Copywriter,
ask yourself this question: “Will someone remember my video 30 minutes from now?”

It’s a simple question to ask. But difficult to execute. You have about 15 seconds, tops.

In The Waking Dead’s case, it reeked of emotion. Without a word being spoken.

And it opened a loop that immediately made me wonder, “How’d Rick get there?”

That gave the episode time to tell a story – without rushing it. And made the payoff create an epic, OMG moment for viewers.

Now as a video sales letter copywriter, you’re always looking for a way to grab people, so they’ll keep watching your VSL and believe the offer; believe you’re leading them to a satisfying payoff.

But let’s be honest, most of the time that doesn’t happen. And a BIG reason your hot, shocking, sexy or mysterious first 10 seconds don’t come together is:

You’re not even thinking about it like that. The concept isn’t on your radar. Yet it’s one of the most important purposes of your hook… or how you enter the conversation leading to your hook.

And when a memorable lead isn’t in place, you’re insecure about every word you write… even if you’re not quite sure why… wondering,

So here’s the deal…

…a mistake that will likely murder your conversions.

…it’s a cardinal sin no copywriter wants to make.

Avoiding this cardinal sin can be as simple as asking yourself one simple question.

Yup, you guessed it…

I actually have that question tacked up onto my wall – just above my computer at home.

It’s a question that keeps me… keeps my lead… keeps the flow of my VSL script in-check.

…rather than putting out just another paint-by-numbers, white noise VSL.

When you do come up with a memorable lead, it makes writing an effective VSL Script almost easy. You get that confident feeling in the pit of your stomach saying, “Yeah baby, I got this!” Your chances of creating a winning VSL skyrocket. And you know it.

But it’s more than that.

Copywriters are always playing a game against each other.

campaign in a market or niche.

Most of us will take the time to deconstruct the control we’re trying to beat – so we can figure out, “Why is this working? Why is this converting so well against cold traffic?”

With that in mind, take a fresh look at today’s top offers and ask yourself, “Are they memorable?”

For instance, is Manifestation Miracle memorable? If so, why? If not, why’s it working? If you’re writing in that space, how can you make something MORE memorable?

You can even take a fresh look at your own stuff. Pull up the last VSL script you wrote. Now, ask yourself, “Is it memorable?”

Sure, maybe it’s converting. But we don’t just like to beat other

people’s controls, we like to beat our own too, right? (Sorry, that sounds wrong;-)

A big part of your work is crafting leads just as memorable as the openings for TV shows like The Walking Dead.

If you can do that…

If you can write a memorable lead that draws prospects in, you’ll be beating controls all day long.

P.S. Don’t go for the obvious. You’ve got to trigger curiosity, shock and awe… or a sense of mystery. So what gets you there? Is it a picture of what your prospects want? Something they don’t want?

Something else entirely? Think about it. Wrestle with it. The time you’ll spend is well worth it.

P.P.S. I’m also a big fan of the TV show Lost. Like The Walking Dead, Lost (or any episodic TV show) was really just one big on-going open

loop. And nobody did it better than Lost – largely because almost every opening and conclusion to the show was… memorable.

It stuck in your head WAY after it was done… making you foam at the mouth for next week’s episode. They knew what their hook was and kept bringing it to life in new ways.

Your VSL lead has to do the same thing.

Daunting? Nah, you’re up for it.

Want to Be an Amazing Writer? Read Like One